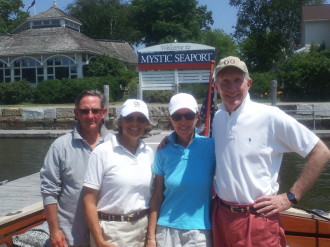 Behind The Scene Tour

We offer the option to stop at a seaside lobster & Clam shack or restaurant for lunch. As we motor home watch the sunset with a glass of sparkling wine.

Capt. Jack will give you a private behind the scene tour of the Museum! As you enter the Museum from the sea you will be feel as you stepped back in time to the 19th century. Capt. Jack will share with you the stories that are behind each exhibit, a history lesson while touching the artifacts that come alive. The story of America is represented through the preservation of these National Treasures’. Capt. Jack will take you places that the public does not have access to. A story teller at heart, Capt Jack will bring to life Captain Thomas Lander and his bride's 1863 voyage aboard the Whaleship Charles W Morgan.

Be amazed by the story of the young woman Henny Sondig and the brave crew of Gerda III, a light house supply ship that saved 300 Jewish men, women and children from Nazi concentration camps and over 700 soldiers. Learn how ordinary Danish citizens who were outraged by the Nazi plan to deport Jews to the death camps used the sea as an underground railroad. The Danish people mounted a spontaneous effort that saved more than 7,000 of their Jewish neighbors - almost the entire Jewish population of Denmark.

Take a ride on one of the last steamers, Steamboat SABINO.Marvel at her coal fired compound steam engine, original to the boat.

Experience what it was like for Danish youngmen as training cadets aboard the full-rigged tall ship Joesph Conrad (ex- Georg Stage) as they learned piloting, sail-handling and seamanship cruising the Baltic and North Sea.

If you have young children, Captain Jack will introduce them to the many hands on activities that are fun as well as educational. Let us know about any special interests.